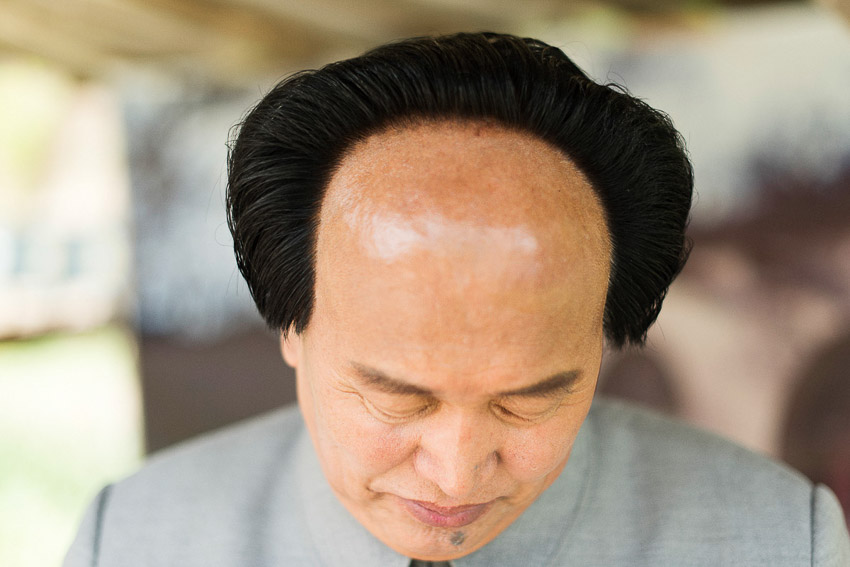 Before long, the Chairman had seeped into every aspect of Yan’s daily life—“I watch my words and behaviors at all time and places”—hijacking his mind. When he traveled to Hunan, where Mao was born, after painstakingly mastering Mao’s thick southern accent (Yan is from northeast China), the crowd around him fell to the ground, kneeling and dragging his legs, refusing to let go. “He’s beyond a great man or an idol in my heart,” Yan explained. “He is a god.” In the past decade, religion of all sorts has experienced a renaissance across the nation, and the Chairman, arguably secular China’s most sacred figure, has been no exception. The original Mao has remained a crowd-pleaser: every morning a line of pilgrims snakes around Tiananmen Square’s mausoleum, dutifully shuffling their way towards the leader’s remains (still in his gray suit). Last year, when the People’s Republic reached the fiftieth anniversary of the Cultural Revolution, which brought the persecution of millions of citizens, Mao Zedong was everywhere and nowhere. Caught somewhere in the paradox of amnesia and nostalgia that is modern China, the father of the nation is still iconic. (In official documents, he is remembered as 70% good, 30% bad.) While the Chairman is only briefly touched upon in history classes, Mao-mania is present in contemporary art and pop culture. There are temples to worship the deceased leader, and “Red Tourism”—revisiting China’s revolutionary past—has become a lucrative industry. And now there are an estimated tens of thousands of Mao impersonators nationwide, devoted to resurrecting the leader. Text by: Kim Wall 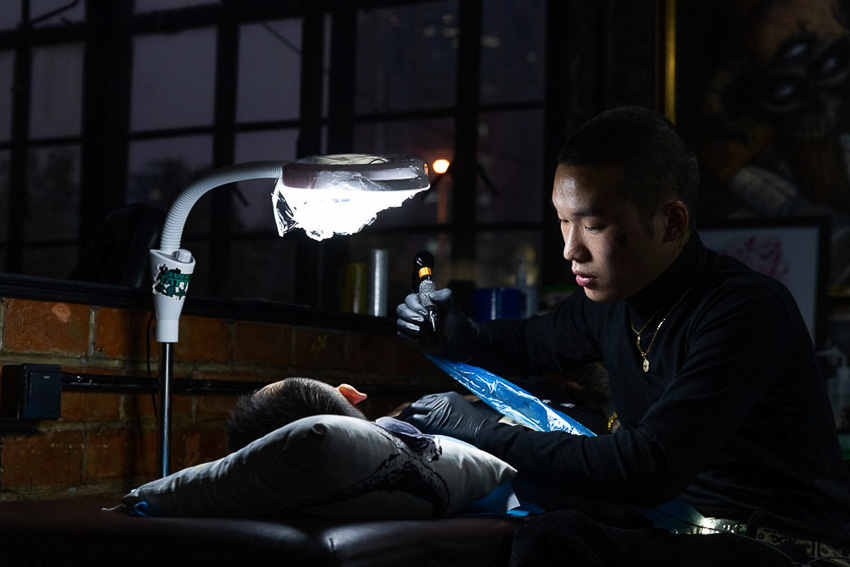 Most visitors to Riyue Bay, on the east coast of China’s southern subtropical island province Hainan, simply head there for a lovely day out – ideally documented with a million new photos. Large rocks near the beach’s southern edge provide perfect platforms for young monks, their wine-red robes flapping in the breeze as they pose with arms aloft. Nearby, middle-aged ladies in bucket hats pay to sit on ponies, the weary nags plopping out dotted dung lines as cameras click. The bay is shared by domestic tourists and members of China’s first generation of Hainan surfers, with the sport having first gained traction on the island around ten years ago. Members of this generation, such as pro longboarder Monica Guo and pro surfer-turned-environmentalist Darci Liu, have not always had a laid back time of it. Unfamiliar with a lifestyle seemingly based around floating and showing off ripped torsos, much of mainstream Chinese society has viewed surfers as work-shy drifters. This view has often been reflected in the law enforcement style on China’s coasts. Hainan police regularly stopped cars with surfboards strapped to them, telling owners they were forbidden to surf near swimmers. In Shenzhen, in China’s southern Guangdong province, security guards sawed chunks out of surfboards. But in August 2016, something changed. That month, it was announced that surfing would be included in the Summer Olympics for the first time, debuting at Tokyo 2020, and since then, the water has got a lot busier in Riyue Bay. Rickety surf shops were bulldozed to make way for a gleaming new surf centre overlooking the shore. Around 100 Chinese surf trainees between the ages of ten and 30, recruited on a new government scheme, have moved to the bay, performing exercise routines in the shadow of the new centre, and crowding the sea with their surf lessons. Text by: Jammie Fullerton 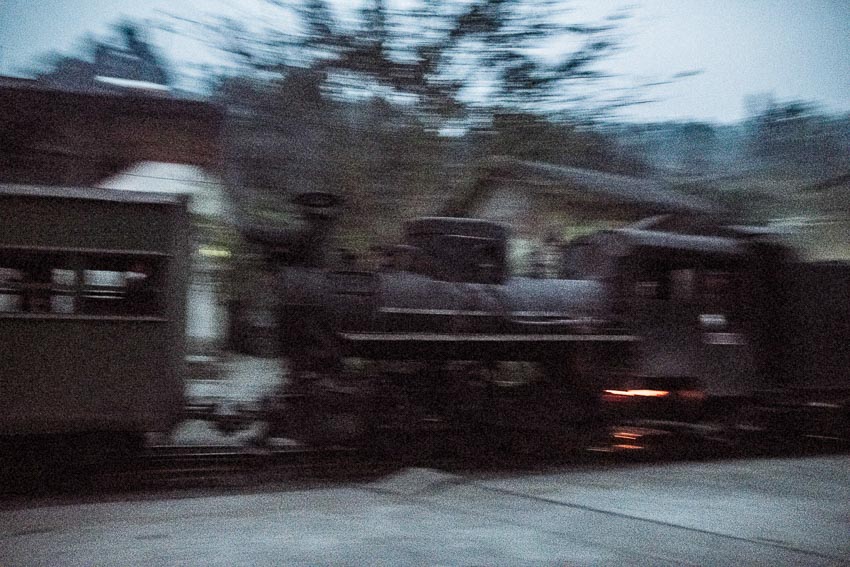 China’s high-speed rail network is the world’s biggest, but in rural Sichuan province, steam trains – which come with a historyof darkness and beauty – offer portals to a slower-paced yesteryear. Last December, China’s state-owned train system operator China Railway Corporation proudly announced that the country was home to the world’s biggest high-speed train network. State media gushed about 124,000km of standard railway plus 22,000km of high-speed rail lines – more than the rest of the world’s com- bined – zig-zagging across China. By 2030, the latter digit will have more than doubled, we are promised. Critics point to China Railway Corporation’s huge debts, deepened by many loss-making routes, but for now, China’s train revolution is very much on the rails, its vehicles connecting the hyper-modernizing country’s cities at speeds sometimes nudging 400km/h. All this is in extreme contrast to the Jiayang Railway in the rural depths of China’s central Sichuan province. Around 200km south of Chengdu – where the population stands at 14.5 million people – on a narrow 19.8km track, the country’s last six functioning coal-powered steam trains – hissing, parping, brown-cloud- belching chuggers – trundle along, cutting through bamboo thickets and yellow rapeseed fields at little over human jogging pace. Text by: Jammie Fullerton 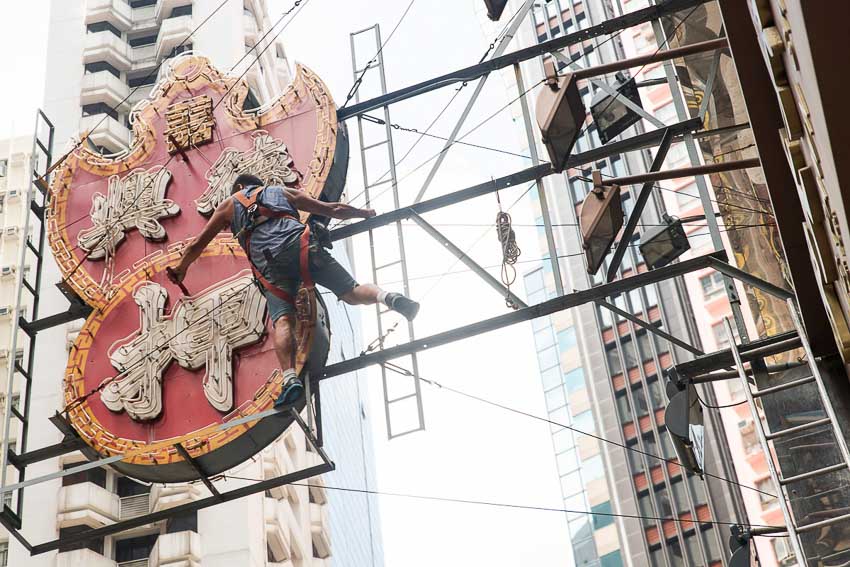 Neon lights have been a staple of Hong Kong’s nightscape for decades, each and every corner of the city basking in their gentle light. The use of neon lights became wildly popular as a new advertisement method during the 1950s, when the economy of the city started growing and a consumerist society quickly developed. Vying for attention in the crowded streets of the former British colony, each business owner tried to outmatch their neighbor’s neon signs, erecting ever taller and bigger billboards. Soon, gleaming Chinese characters, sleek dragons and suggestive figures populated the night sky of Hong Kong, promising all kinds of amusements to the visitors of the “Pearl of Orient”. According to CityLife, a Hong Kong tourism magazine, up to 90% of the main neon lights of the city have disappeared during the last 20 years. “Neon has been the light of the city for a really long time, you couldn’t escape from it. You saw Hong Kong through neon lighting or because of neon lighting,” says Aric Chen, lead curator of design and architecture at the M+museum, focused on Hong Kong’s visual culture. Before the museum opened its doors, Chen curated M+’s first online exhibition in 2014, a highly popular website that celebrated the city’s neon installations, fuelling a nostalgic movement to rediscover them. Graphic designers and artists have bought into the initiative’s goals, creating new indoor neon signs and installations, and pushing for the revival of an icon of Hong Kong’s identity. “A lot of culture coming from China is influencing Hong Kong in different ways,” says Kwok. “People are becoming aware of the disappearance of Hong Kong’s culture, and want to retain it,” he says. This comeback has helped some of the companies still creating and installing neon billboards to find a new way to survive after years of losses. After more than three decades in the business, Frank Sin decided to launch his own company at the end of May, Frank Sin Neon Light Business, which manufactures and provides maintenance for neon lights. In less than a month, his new workshop has already received six orders. This new business-owner says that the demand for neon lights went up in 2012, when local artists and designers, sometimes returning from overseas, became aware of Hong Kong’s characteristic neon heritage. “Even earlier I would convince some customers to use neon lights instead of LED,” he says. But others don’t think this is a sustainable model. Wu Chi-Kai, one of the last neon lights craftsmen working in Hong Kong, says that his workshop can’t be sustained “through small-scale projects” and says that his workshop’s revenue is down 80% from 25 years ago. At the same time, technicians able to repair fragile neon tubes are more difficult to find than ever and their services are becoming pricier, shopkeepers complain. The result is that even the most iconic signs still standing in the streets might have two or three color tubes burned out, or some of the parts blinking gloomily. Text by: Eduard Fernandez 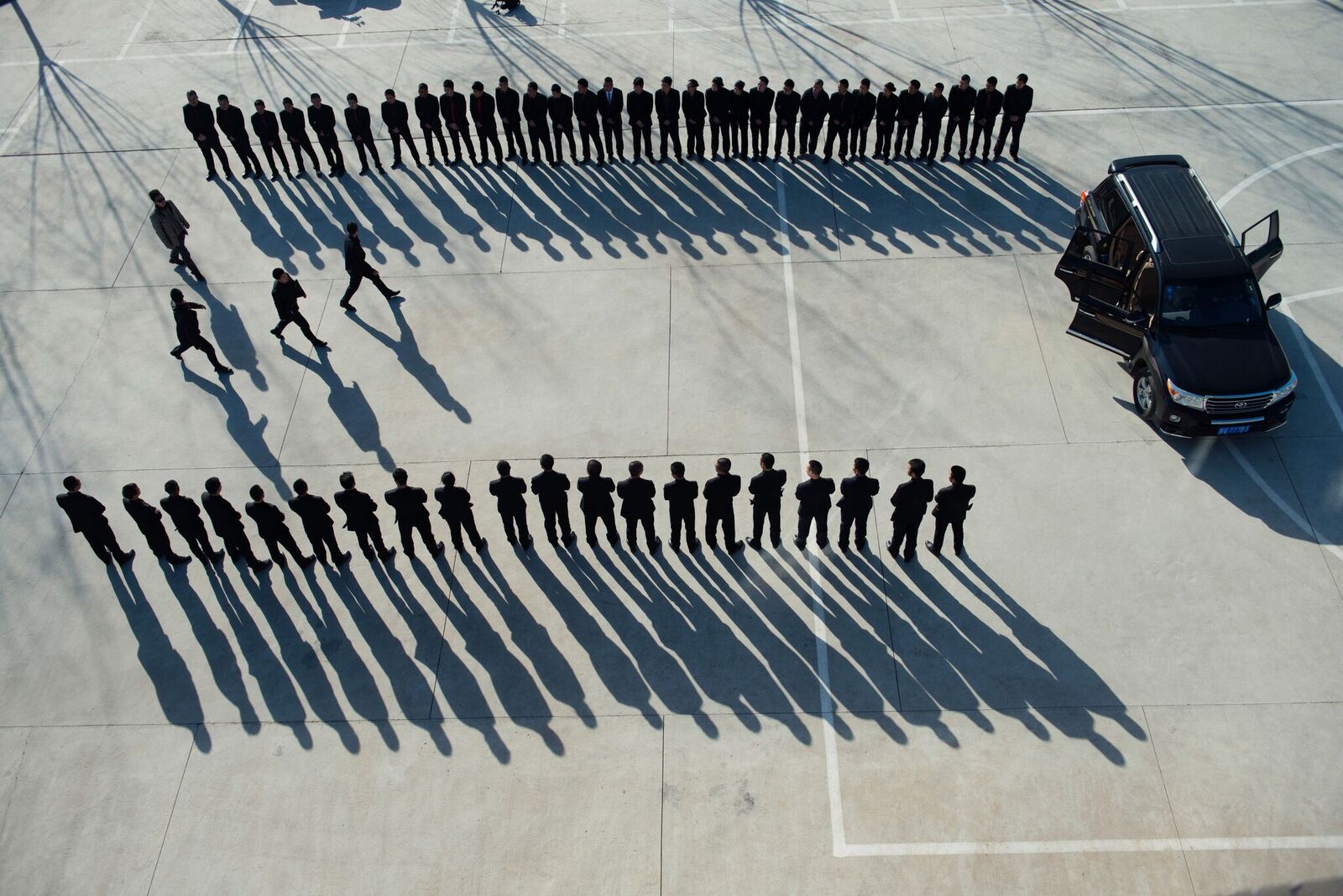 Surprisingly, until Chen Yongqing, a former soldier, decided to open his Genghis Security Academy, nobody in China had tried to professionalize bodyguard training business. But, in a country that every year adds new names to its list of millionaires, the idea was bound to be a success. We get behind the gates of the school to know who this first generation of Chinese professional bodyguards are, and how they are trained, either learning how to fight and protect their employer, or or just taking some classes to learn how to keep their bosses’ agenda well-organized.